Blue World City Islamabad is a flagship project by Blue Group of Companies. It is located near Chakri Interchange. It aims to provide affordable living opportunities in the twin cities of Islamabad and Rawalpindi. Blue World City offers different types of plots to the interested customers who can choose one of the given choices and develop it into their home. There are commercial plots as well for those who want to invest in it for business purposes.

Rawalpindi Development Authority gave the project NOC in the initial phase. Later, a dispute grew as the result of District Council Rawalpindi having some conflict with it over the area of jurisdiction.

Here is a brief overview of the Blue World City NOC status.

Importance of NOC for a Residential Project

NOC holds a significant role in any project. The proof of legitimacy authorizes the project owners and developers to work according to the rules and regulations set by local and federal authorities.

Real estate development projects are given NOCs to help them work smoothly and without any legal hurdles. It ensures that the company is working according to the guidelines set by authorities. If a residential project doesn’t have a NOC, it means that it is not legitimate.

The efforts for the development of Blue World City Islamabad began with the issuance of NOC. The management filed an application to get a NOC for the project. At that time, the responsible authority was Rawalpindi Development Authority which issued a NOC for BWC vide ‘DA/MP&TF/F-PHS-PTR-10/148.’

This no-objection certificate was issued on February 19, 2019. The initial permission was that of acquisition of 427 kanal land for development purposes. The problem grew when there was an issue regarding the jurisdiction of RDA and the District Council. Misinformation regarding this project was spread, telling the investors that it had been deemed illegal.

Blue World City had filed a petition for the approval of its legal status. The case was decided in favor of Blue World City. With the settlement of the case, a new era began in the real estate world of Pakistan. 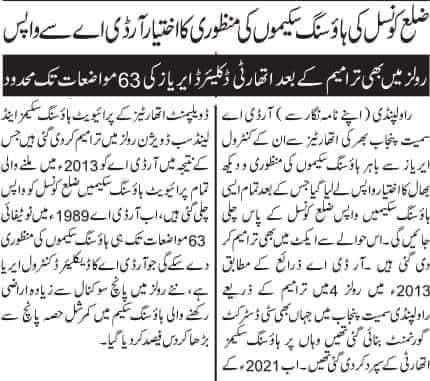 The society has a scope of about 10,000 kanal area for different blocks. As it is a joint venture by Pakistani and Chinese corporate organizations, it will develop into a marvelous residential project. The change in situation for Blue World City came as the result of the transition of authority from city developmental authorities in Punjab to local district councils. The decision was taken in 2021.

As said earlier, RDA approved BWC initially, and now District Council has also authorized it. The district council approved the NOC for Blue World City in December 2021, after it was given the authority regarding housing societies. 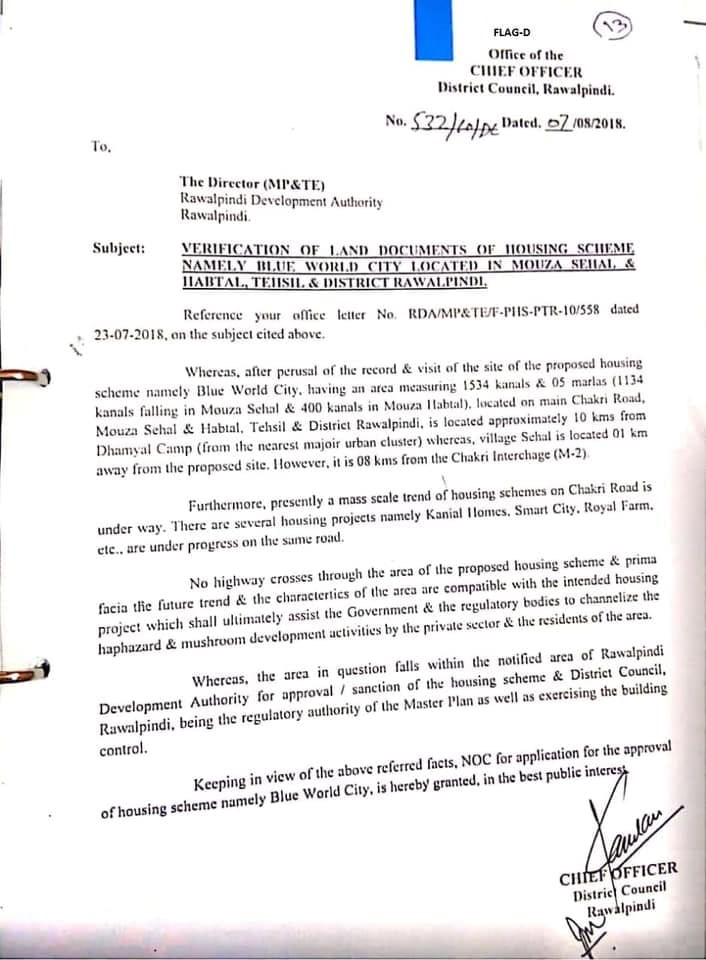 The authority of development in different mouzas was clarified by the district council. As Governor Punjab Chaudhry Muhammad Sarwar signed the authorization of District Councils’ jurisdiction via Punjab Local Bodies Ordinance, the Blue World City NOC was automatically rectified.

Now, Blue World City has proper legal status as the result of the NOC issued by the District Council.